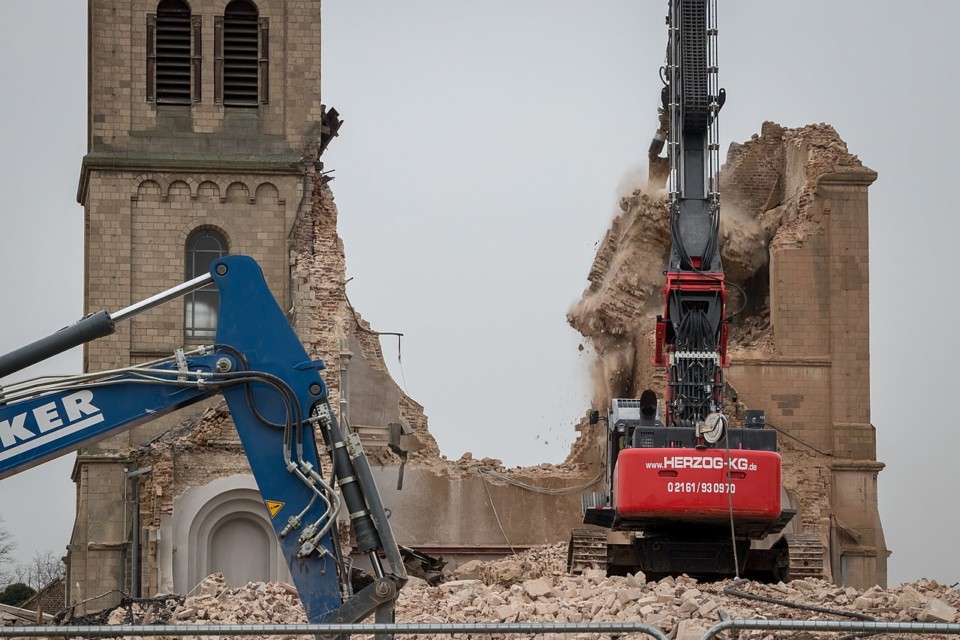 As Wikipedians of Cologne, we are quite sensitive when it comes to the loss of cultural heritage. Almost nine years ago, our city archives collapsed during a subway construction nearby. Although 95% of the archival items have since been salvaged, they are far from being “rescued“; the consequences keep restoration work going for the next couple of decades (yes: decades). And don’t think we already have a new archival building … An unhealed wound in the center of Cologne (2017).
Photo: Maximilian Schönherr, CC BY-SA

That being said, we keep an eye on documenting cultural heritage and other buildings that still exist, always thinking to ourselves: “who knows if they suddenly disappear!“. What’s gone, might be gone forever.

A few kilometres west of Cologne lies the Rhenish lignite surface mining area, a huge territory of open mining. It eats people’s homes, villages, nature and cultural landscapes due to our hunger for energy. It has done this for many decades, a lot of villages in the area have the prefix „Neu-“ (new) in their names, as they were (kind of) relocated while the old villages have vanished.

Of course, we know beforehand about these desctructions because the plannings also span decades. And of course, Wikipedians visited the deserted villages before their demolition, to take pictures. Around two years ago, a small group of our local community visited the deserted village Immerath, home of the so-called “Immerather Dom“ (cathedral of Immerath). This nickname of the St. Lambertus church was due to the fact that the church was much larger and architecturally more outstanding than one would expect from such a small village. We took our community drone and managed to document a lot of the exterior architecture by video. At this time, one of the tower walls was already damaged as the bells were taken out. Unfortunately, it was already too late to take pictures of the interior.

The raw footage resided on my hard disk until recently, because I personally was not happy with the results. We had just started with our drone experience at that time, and I thought we could have done a better job. But it was too late. Maximilian, another Wikipedian, flew again some weeks ago and the difference was appalling: almost the whole village was gone already. I felt the pressure to eventually publish the video one day before the final demolition. Suddenly, it seemed to be not that bad … (Due to our feelings on that day, there is a slight ‘Point of View’ in the sound layer, we have changed that in a remix for the Wikipedia article.)

Raymond, Maximilian and Superbass traveled again on the second day of the destruction and documented what was going on. Another Wikipedian from the region – Pappnaas666 – took a video as well, as we found out later. Wikipedians are everywhere …

So all in all, except from the interior, I think we managed to create a pretty good photo and video coverage of the “Immerather Dom“ and its extinction in the second decade of the 21st century, at the very start of the European Year of Cultural Heritage. Some people have started to expand the Wikipedia article in German and English which were quite short until recently. After all, it was “only“ a 19th century village church and it gets a lot of attention due to the recent events. To receive more information about the exact measurements and the architectural plans, we had to visit the temporary reading room of the City Archives of Cologne, of all archives. Although we cannot yet touch the archival item with our hands or get a proper digitization, we can catch a sight on the condition of the plans in the photo documentation: at least the documentary heritage of the building is not completely atomized, like the original is. Our request to everybody: please keep on documenting stuff and upload it to Commons, who knows when it disappears?

(This blogpost was contributed by Elya, a Wikipedian from Cologne, Germany and former member of the Wiki Loves Monuments international team)