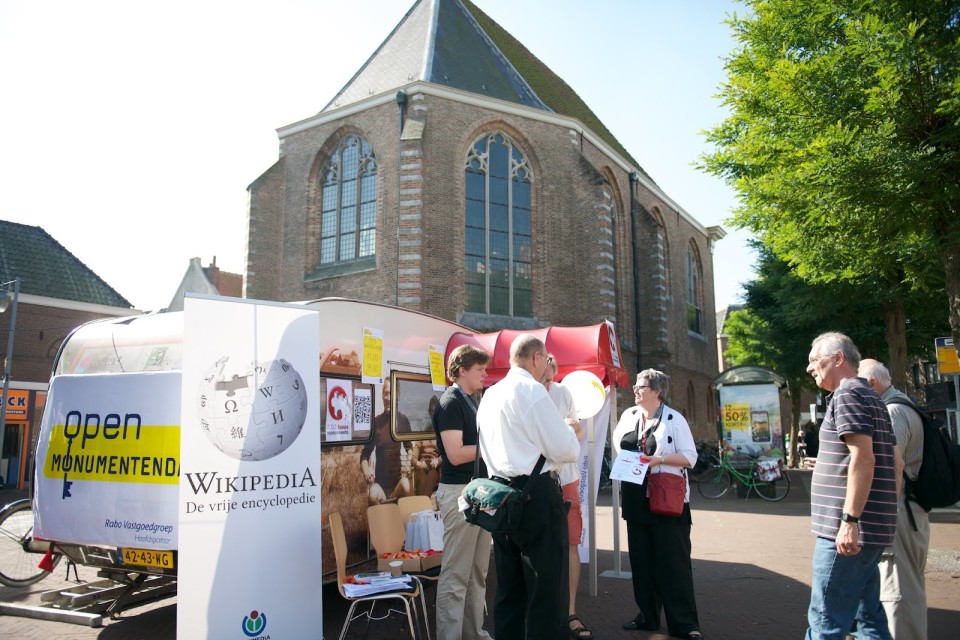 Wiki Loves Monuments was present at the Heritage Day in Gouda, september 8th. You might know Gouda from the yellow cheese which was originally produced there, but the city is also home to the stroopwafel – the cookie that has become very popular in Wikimedia circles. We worked with the team of Gouda Heritage Day to inform the public about Wiki Loves Monuments and the special contest for photos of Gouda monuments, both the national monuments and the municipal monuments. The public was very enthousiastic about the concept of the photo contest but some 10 % of the people was – interestingly enough – not familiar with the name Wikipedia, one of top ten of best visited websites in the world.The day coincided with the Open Heritage Days on which many monuments in the Netherlands open up for the audience and people can enter buildings which are normally locked down. This was of course a perfect opportunity to promote Wiki Loves Monuments!

The municipality and local volunteers helped us getting the permits to place a caravan on one of the squares in central Gouda, which we decorated with logo’s, posters and more – and had of course wifi access in the caravan so that people could use it to upload. We quickly learned that while most of the visitors of the Heritage Day were of senior age, but that often the men were taking photos, and then told they would ask their wife, “who is much smarter with those computer things”, to upload them once they got home. Often they promised not only to upload the photos of that day, but also the many photos they have collected over the years of Gouda and other cities.

All in all a successful day and a clear example that going out and about and hand approach people about this contest might be a successful approach!