It’s the second time that I take part in the world’s largest photography competition: Wiki Loves Monuments. Being German, it was reasonable for me in 2011 to take photos somewhere in Germany. I participated in a special event in Middle Hesse where we took with up to a dozen people more than 5’000 photos in one week and I even won the award for the highest amount of uploaded files in Germany! Unfortunately, I could not join such an event this year but I wanted again to be part of a new potential Guinness World Record that we want to achieve again. So I decided to take older photos of monuments I haven’t uploaded to Wikimedia Commons yet. 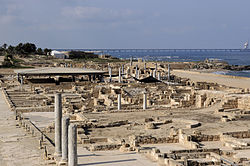 Since all of my files from Europe are already there, I had to take a look at my tourist activities beyond this continent. Luckily, this year’s competition does not only take place in Europe but also in several other countries around the world. But which files should I upload now? The monuments I shot in the United States around this year’s international conference Wikimania, older ones from last year’s Wikimania in Israel or other ones? Being a student of Classics, I decided to upload first the pictures that I’ve taken in the former Roman provincial capital of the Judaea Province, Caesarea Maritima (see the Wikipedia article), to illustrate articles in Wikipedia and throw light on this time and area in general.

Martin in action in Middle Hesse

With these ~350 files I’m so far the top 3 uploader in Israel! Since the contest in Israel runs till Monday, I just have little time to share my sightseeing impressions from this beautiful country, be it Jerusalem or the Sea of Galilee. And I can only encourage you to upload your impressions from Israel too, or take part in next year’s competition around the world!