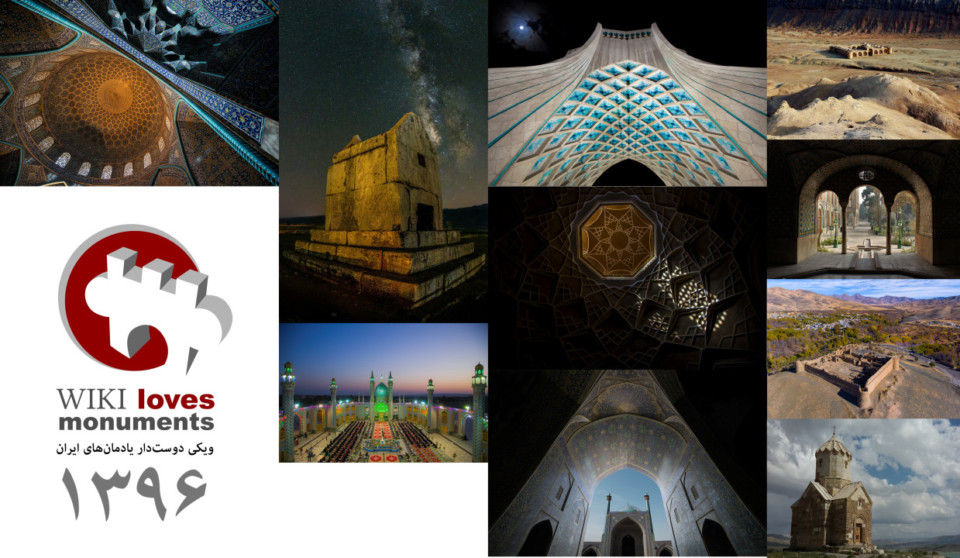 We are thrilled to announce the 10 winning photos of Wiki Loves Monuments 2017 in Iran. These photos are selected by Iran’s jury ( Diego Delso, Hamid Eskandari, David Gubler, Sam Javanrouh, Mohammad Majidi, Kimia Rahgozar) and volunteers from the more than 4700 photos uploaded by 383 uploaders. These photos are now nominated to compete with nominations from 50+ other campaigns to compete at the Wiki Loves Monuments international level.

As always and before going to the winners: Although Wiki Loves Monuments is a photo competition, the story of the people behind the photos is as beautiful and important as the photos themselves. These are the people who have decided to share their knowledge and documentation of the world’s built cultural heritage with the rest of the world through Wikipedia and other Wikimedia projects. As a result, when we knew more about the photographer and the moment they captured the photo in, we have shared a bit more with you. First place. The ceilings inside of Sheikh Lotfollah mosque in Isfahan are detailed and colorful. However, these colors are usually captured in isolation. In this photo, Mohammad Tarem captures the combination of blue colors of the ceiling above mihrab with the warmer orange colors of the dome. (Mohammad Tarem, CC BY-SA 4.0) Third place. A Safavid era shrine in Aran-o-Bidgol, Isfahan. The photographer travels a long distance to capture this photo of the old shrine in the early hours of the day and in the month of Ramadan when special lighting and early morning prayers give a unique look to this shrine. (Mostafameraji, CC BY-SA 4.0) Fourth place. Azadi Tower as seen by the photographer who captures it as the moon traverses the sky of Tehran in the last days of the summer.  (Mohamad Omrani, CC BY-SA 4.0)

Fifth place. The light as it shines through the windcatcher (bādgir) in Tabātabāei house in Kashan creates a magical space in this 140 year-old house of the affluent Kashani family. (Mostafameraji, CC BY-SA 4.0) Sixth place. The scaffolding around the Imam Mosque in Isfahan didn’t stop Mohammad Tarem from rethinking the framing of the mosque. The photographer used the dark space inside the building and the walls and ceilings around him to create a dominant frame and yet depict the monument. (Mohammad Tarem, CC BY-SA 4.0)

Seventh place. A photographer with a fascination for the many caravanserai’s around Ravar, Kerman, including Chah Kouran Caravanserai, a Qajar era brick building visible from the road while driving. The photographer hits the road early in the morning to capture this moment and share it with Wikipedia. He takes photos from the hill facing the building for a long time before going down and taking more photos of the building from close-up. (Pourjafari, CC BY-SA 4.0) Tenth place. The quiet and untouched nature behind the southern mountains of Maku is home to Chapel of Dzordzor, a UNESCO World Heritage Site and one of the three Armenian Monastic Ensembles located in the northwestern part of Iran. Davood80z takes this photo of the monument in Spring 2014 and while traveling with his wife and two children in the region. The photographer recalls the moments of seeing the chapel, a remarkable moment, since prior to that he had not been able to find a detailed photo of it online.  (Davood80z, CC BY-SA 4.0)

Interested to see nominations by other Wiki Loves Monuments 2017 campaigns? Check them out.