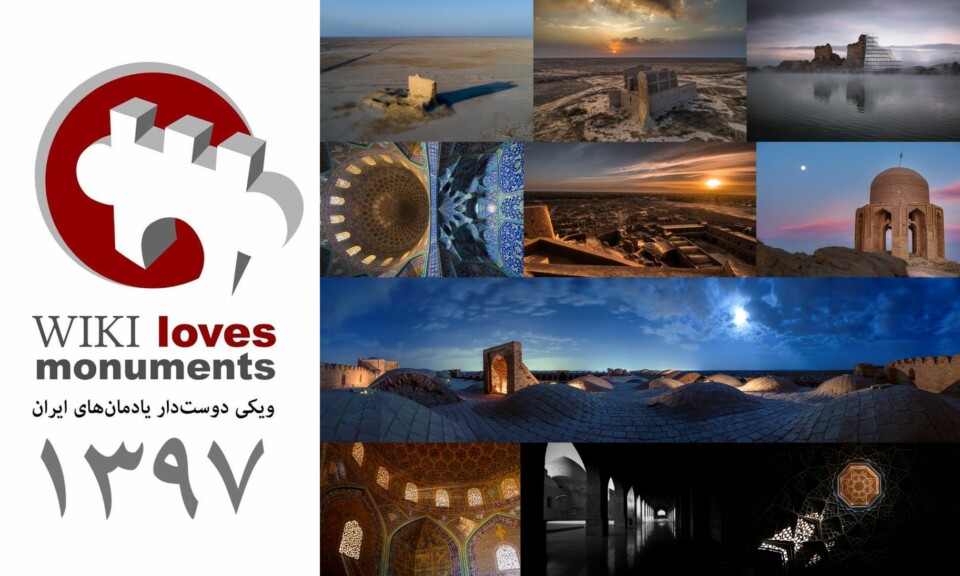 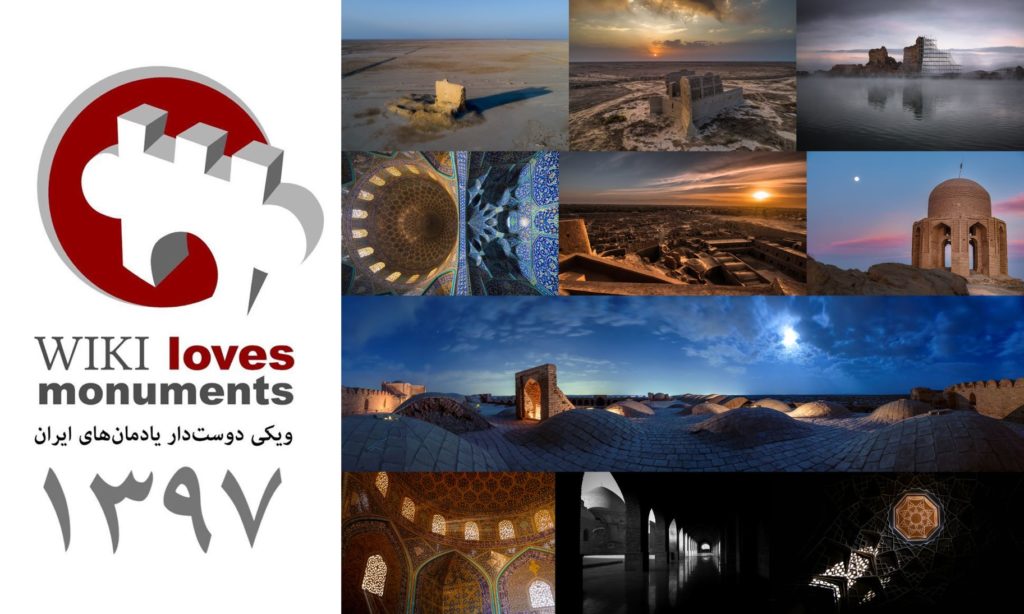 Between September 5 (۱۵ شهریور)  and October 7 (۱۵ مهر) of 2018,  close to  1300 people participated in Wiki Loves Monuments in Iran. The local contest, now in its fourth year, has been a force to help enrich Wikipedia with photos of more than 26,000 nationally registered monuments of Iran. Today, we share with you some of the statistics of the 2018 contest and, of course, celebrate the nomination of the top 10 photos from Iran to compete at the international level with the rest of national campaigns.

1279 participants joined this year’s contest by uploading at least one photo of one of the 26000 nationally registered monuments in Iran. From this number, 90% of the participants are newcomers, a strong signal of the ability of the contest to engage newcomers and enable them contribute to Wikipedia. These participants uploaded 13,641 (and counting) photos to Wikimedia Commons, the media repository for Wikipedia. 9% of these photos are currently being used in one or more of the Wikimedia projects.

The number of uploads by these participants puts Iran in rank 6 at the international level, after Russia, Italy, Germany, Ukraine, and India. (Learn more about detailed statistics by country.)

The top 10 winners of Iran are announced thanks to Iran’s jury ( Diego Delso, David Gubler, Sam Javanrouh, Mohammad Majidi, Tala Vahabzadeh) and volunteers who reviewed more than 13,000 photos. These photos are now nominated to compete with nominations from up to 55 other campaigns at the Wiki Loves Monuments international level.

As always and before going to the winners: Although Wiki Loves Monuments is a photo competition, the story of the people behind the photos is as beautiful and important as the photos themselves. These are the people who have decided to share their knowledge and documentation of the world’s built cultural heritage with the rest of the world through Wikipedia and other Wikimedia projects. As a result, when we knew more about the photographer and the moment they captured the photo in, or if the jury had shared their comments about the photo, we have share that with you. 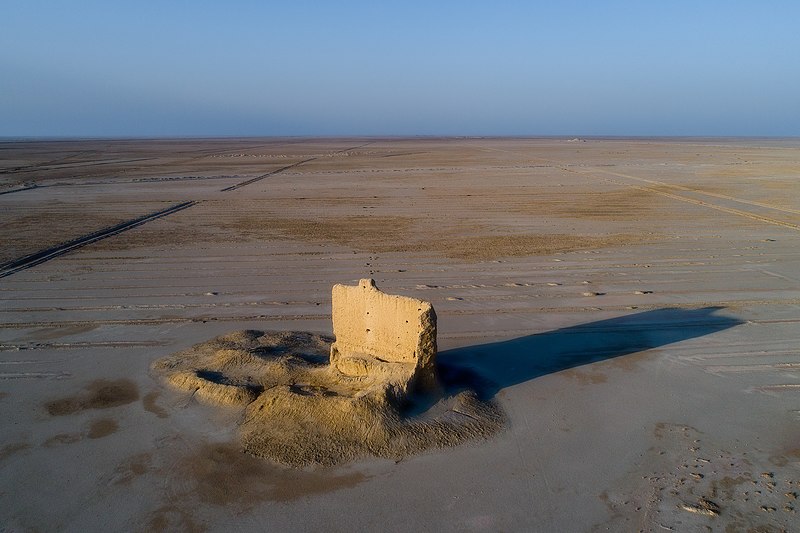 First place. A Safavid-era windmill in Zabol, a city in the province of Sistan and Balouchestan in the south-east part of Iran, known for its strong winds. The jury describes the photo as “simple”, “abstract”, with “great sense of isolation and beautiful light”, and “nice composition and contrast”. (Dolphinphoto5d, CC BY-SA 4.0) 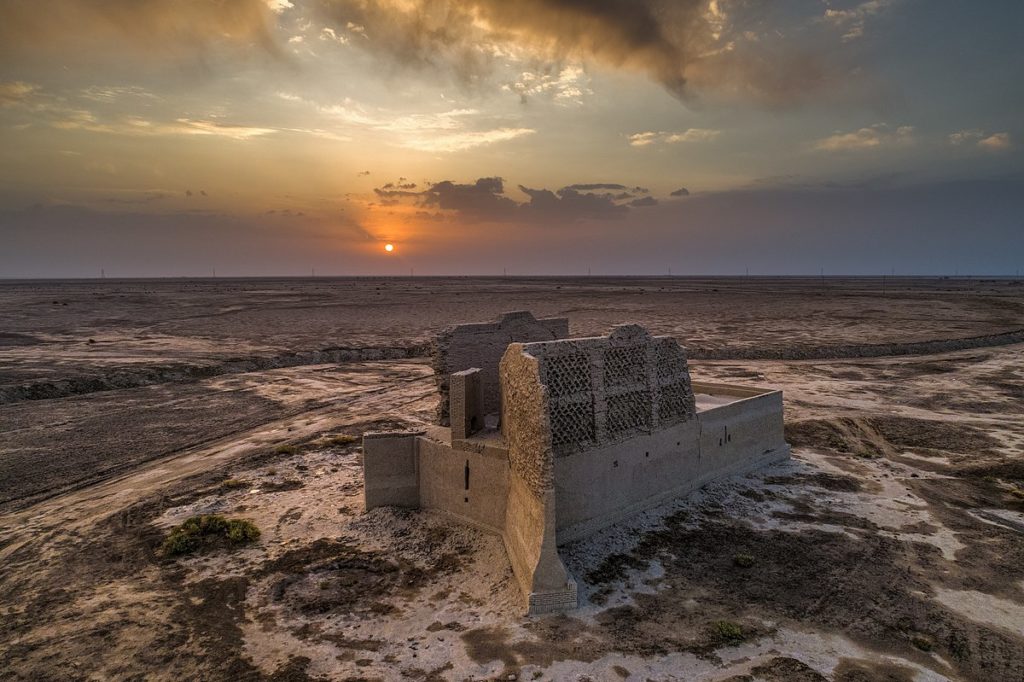 Second place. Another view of the Safavid-era windmill in Zabol. The jury describes the photo as one with “beautiful light and colors”, “perfect sense of location and great light”. (Dolphinphoto5d, CC BY-SA 4.0) 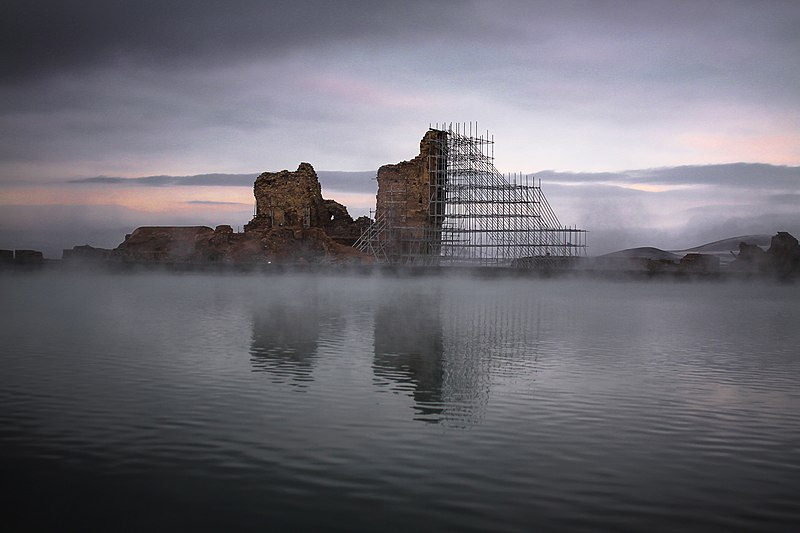 Third place. An early morning winter shot of Takht-e Soleyman (also known as Azar Goshnasb, the fire of the warriors) by Ebrahim, a 28-year old architect who spent days in Takht-e Soleyman to work on his project. One morning, he finds himself mesmerized by this scene, returns to his room and picks up his camera, and … shot! The jury describes the photo as one with “great atmosphere and light” and “good composition and pleasant contrast/depth of field”. (Ebrahim Alipoor, CC BY-SA 4.0) 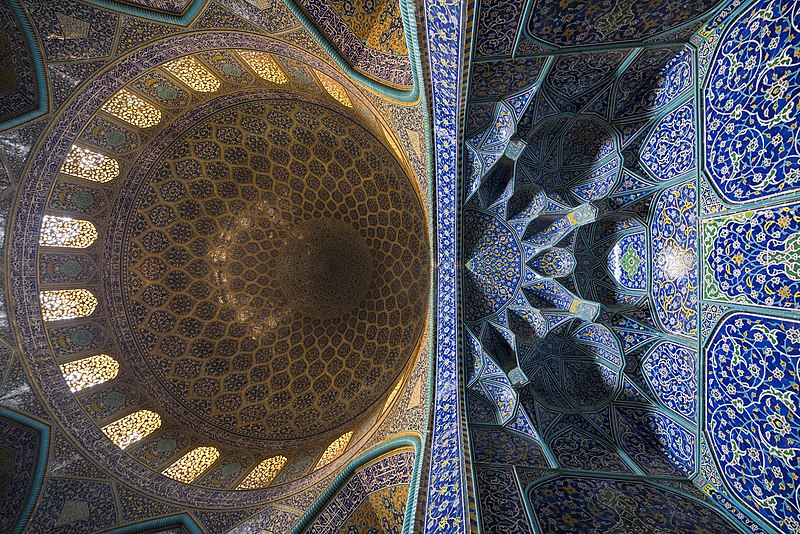 Fourth place. One of the most popular stops among Wiki Loves Monuments photographers in Iran is Sheikh Lotfollah mosque in Isfahan, part of Meidan Emam, a UNESCO World Heritage site. The photo depicts the ceiling of the mosque in a vibrant and colorful way, combining the blue colors of the ceiling above mihrab with the warmer orange colors of the dome. The jury described the photo as one with “great quality” and “clever framing [which] makes this a different view of a symmetrical design.” (Ara9979, CC BY-SA 4.0) 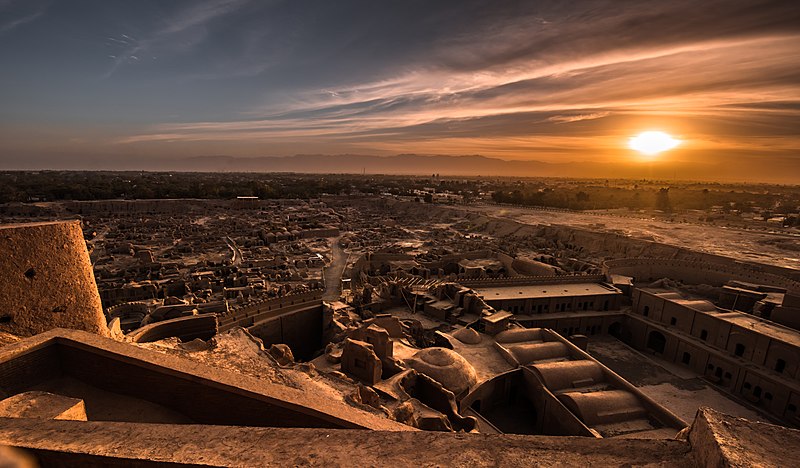 Fifth place. The Sasanid-era Arg-e Bam is a UNESCO World Heritage Site and an adobe located in the city of Bam. Herbert, now in his late thirties and one who makes imagination alive by taking photos, decides to pay a visit to the site on his way from Kerman Province to Sistan and Balouchestan. The sun is setting and he runs up the stairs to capture the last minutes of one more day this historic site has witnessed. He opens this photo with “The burnt Empire/Arg-e Bam”. The jury describes the photo as one with “great light and good overview of the location” and “the landscape reminds us of a scene in Star Wars.” (Herbert karim masihi, CC BY-SA 4.0)

Sixth place. Shah Firooz monument, one of the symbols of the city of Sirjan, is captured by Ebrahim, a professional photographer who has been taking photos of the monument to create a time-lapse of the Moon’s rise in the night’s sky. This photo was shot when he was looking for a perfect angle to capture a partial lunar eclipse the day after. The jury describes it as “an interesting monument” and one which has “a nice composition with a great lighting.”. (Ebi.eftekhari, CC BY-SA 4.0)

Seventh place. A returning photographer and past international winner, Mostafa, shares with us the experience of spending a month in the Kavir of Iran and having full access to Deir-e Gachin Caravansarai, a Sasanid-era monument that was restored during multiple dynasties afterwards. The carvansarai is known as the Mother of Iranian Caravansarais and is located in the center of Kavir National Park. Mostafa shares immense enthusiasm and gratitude when sharing his memories of the time spend in the monument and vicinity. In this scene, he chooses to go with lantern-light, after he and the team tried many different light options in the scene, and of course, only panorama could do justice to the monument. The jury describes the photo as “a unique look at the roof features of this caravansary. very high resolution.” and one with “great use of panorama to create a sense of immersion” and “good sense of environment and nice lighting.” (Mostafameraji, CC BY-SA 4.0) 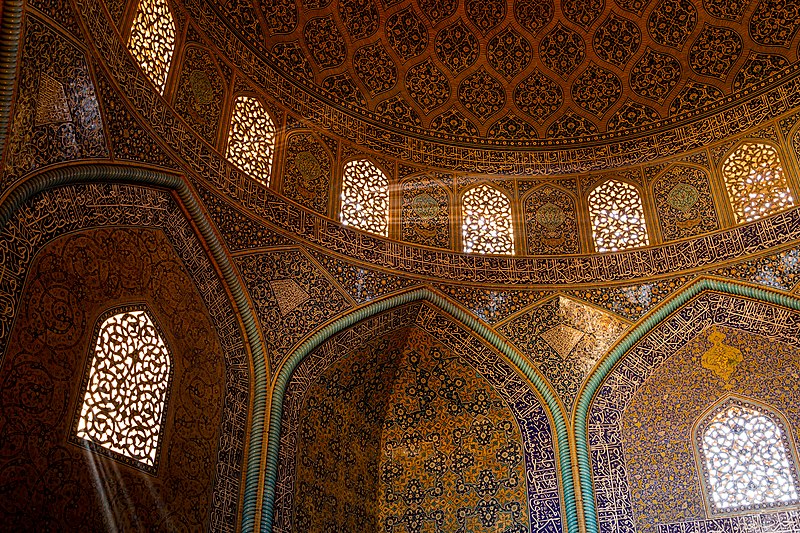 Eighth place.  The vibrant interior of Sheikh Lotfollah Mosque in Isfahan. The jury described the photo as one with “great light and details” and one which could improve by “technically correct colors and neutral framing”. (Maryamzandiehvakili, CC BY-SA 4.0) 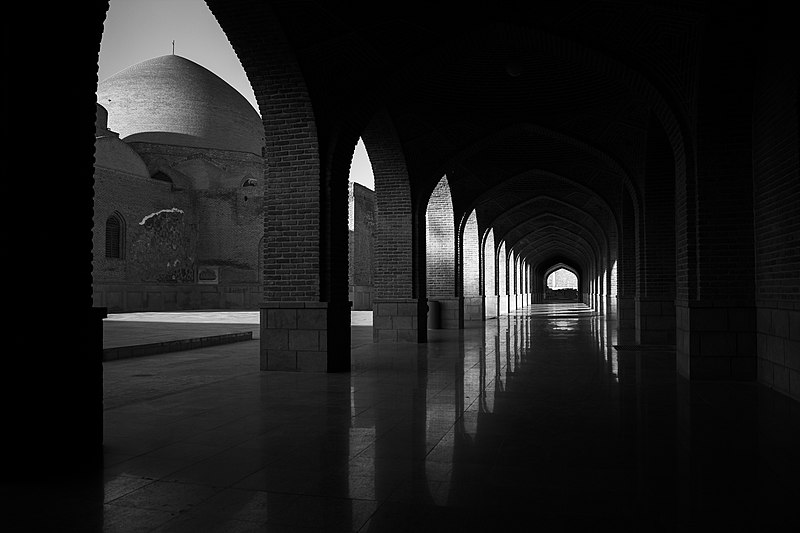 Ninth place. ‌Blue Mosque in Tabriz, a Safavid-era monument that was severely damaged in the earthquake of 1780s, still in need of restoration efforts. The jury describes the photo as one with “great use of light and dark and use of effective composition”. (Parisa71, CC BY-SA 4.0)

Tenth place. A view of bādgir, windcatcher, in the Tabātabāei House, a historic house in Kashan. It was built in the early 1880s for the affluent Tabatabaei family. (Sayyed Mohammad Yasin Mousavi, CC BY-SA 4.0)

Interested to see nominations by other Wiki Loves Monuments 2018 campaigns? Check them out!